The PUFFIN team work out of the Plasma Science and Fusion Center here at MIT, though we are from a range of departments. There are two graduate students, though we often have openings for undergraduates to join us for a UROP project. See the “Work With Us” page for more information about becoming part of our team! 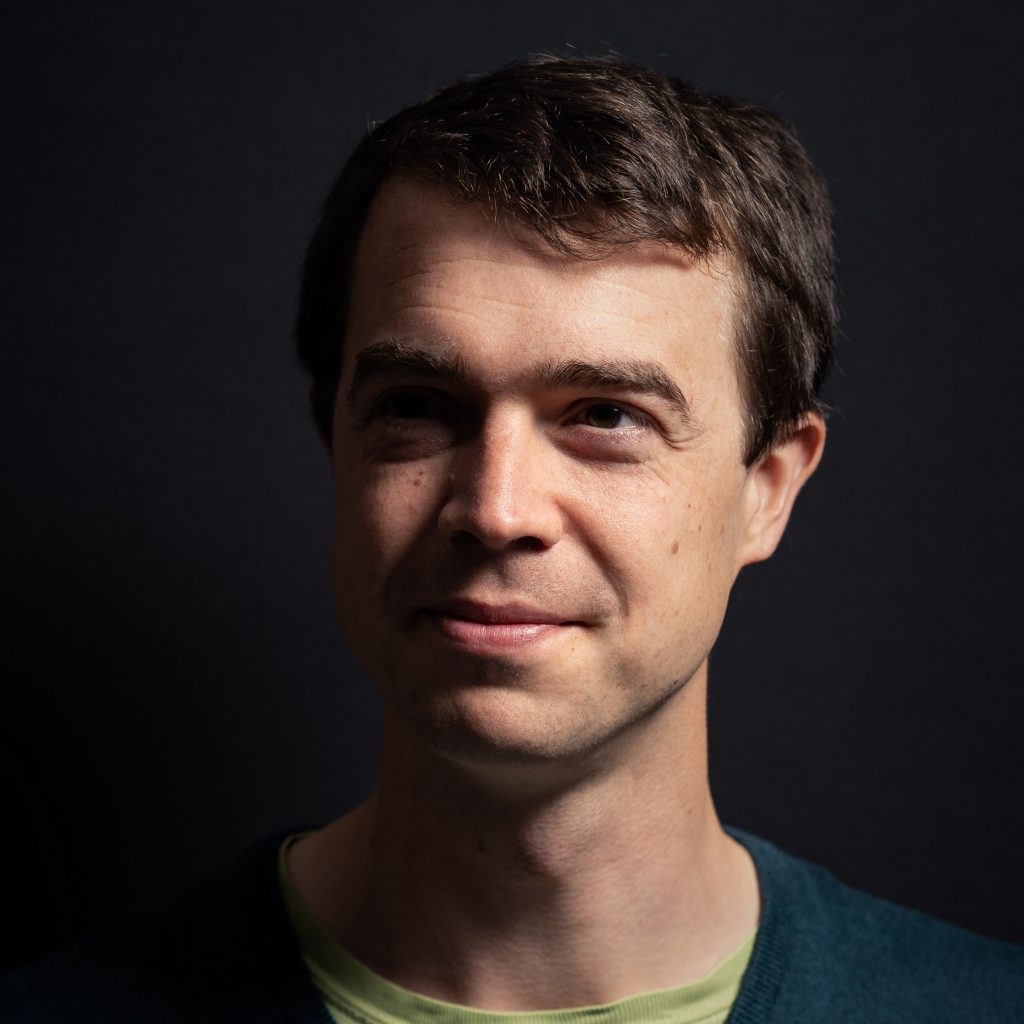 Prof. Jack Hare (he/him, jdhare@mit.edu) is an assistant professor in the Department of Nuclear Science and Engineering. His doctoral research was on magnetic reconnection driven by pulsed-power, carried out at the MAGPIE facility at Imperial College London. As well as magnetized high-energy-density plasmas, Jack enjoys hiking, cycling, climbing and caving. His personal webpage is fusionandthings.eu 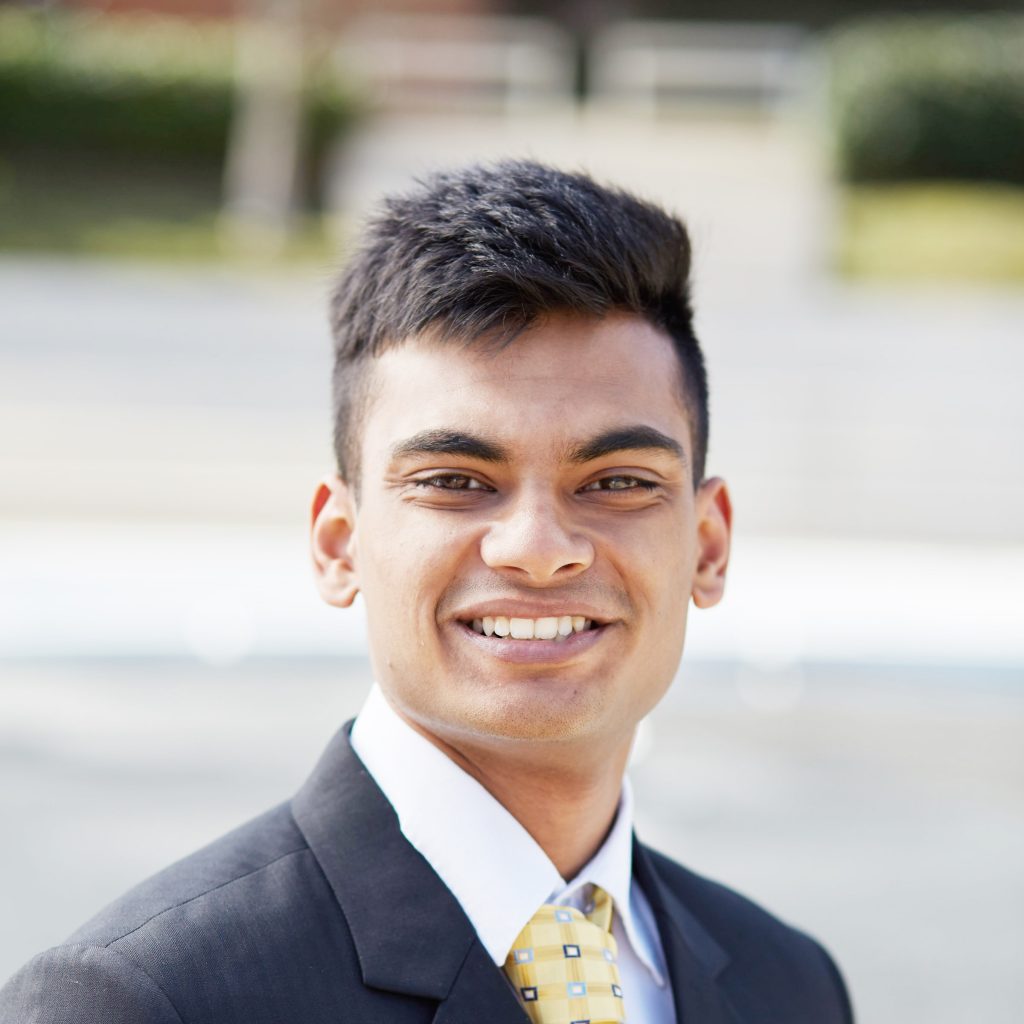 Rishabh Datta (he/him, rdatta@mit.edu) is a graduate student in the Department of Mechanical Engineering at MIT. Rishabh is interested in magnetohydrodynamic turbulence in plasmas. In addition, Rishabh has a strong interest in sustainability and biodiversity conservation. Rishabh’s website is ridatta.com 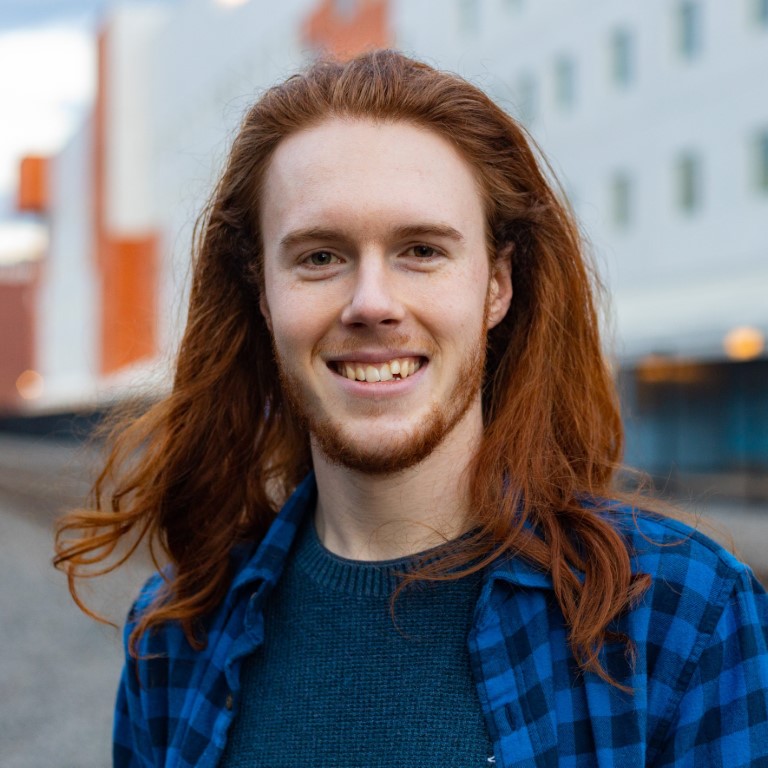 Thomas Varnish (he/him, tvarnish@mit.edu) is a graduate student in the Department of Nuclear Science and Engineering at MIT. He is interested in using pulsed-power experiments to better understand astrophysical plasmas. Outside of the lab, Thomas enjoys baking, knitting, and the odd bit of snowboarding. His website is thomasvarnish.co.uk 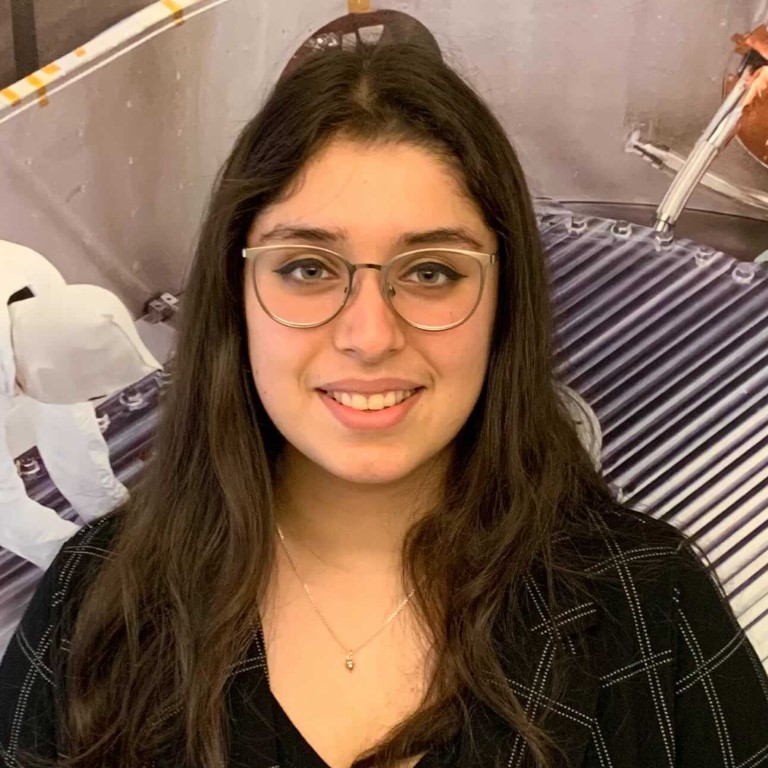 Simran Chowdhry (she/her, schowdhry@psfc.mit.edu) is a graduate student in the Department of Nuclear Science and Engineering at MIT, jointly working with Jack Hare and Nuno Loureiro. She is interested in radiative effects and instabilities in magnetic reconnection. Outside work, she enjoys playing the cello, singing and rowing. 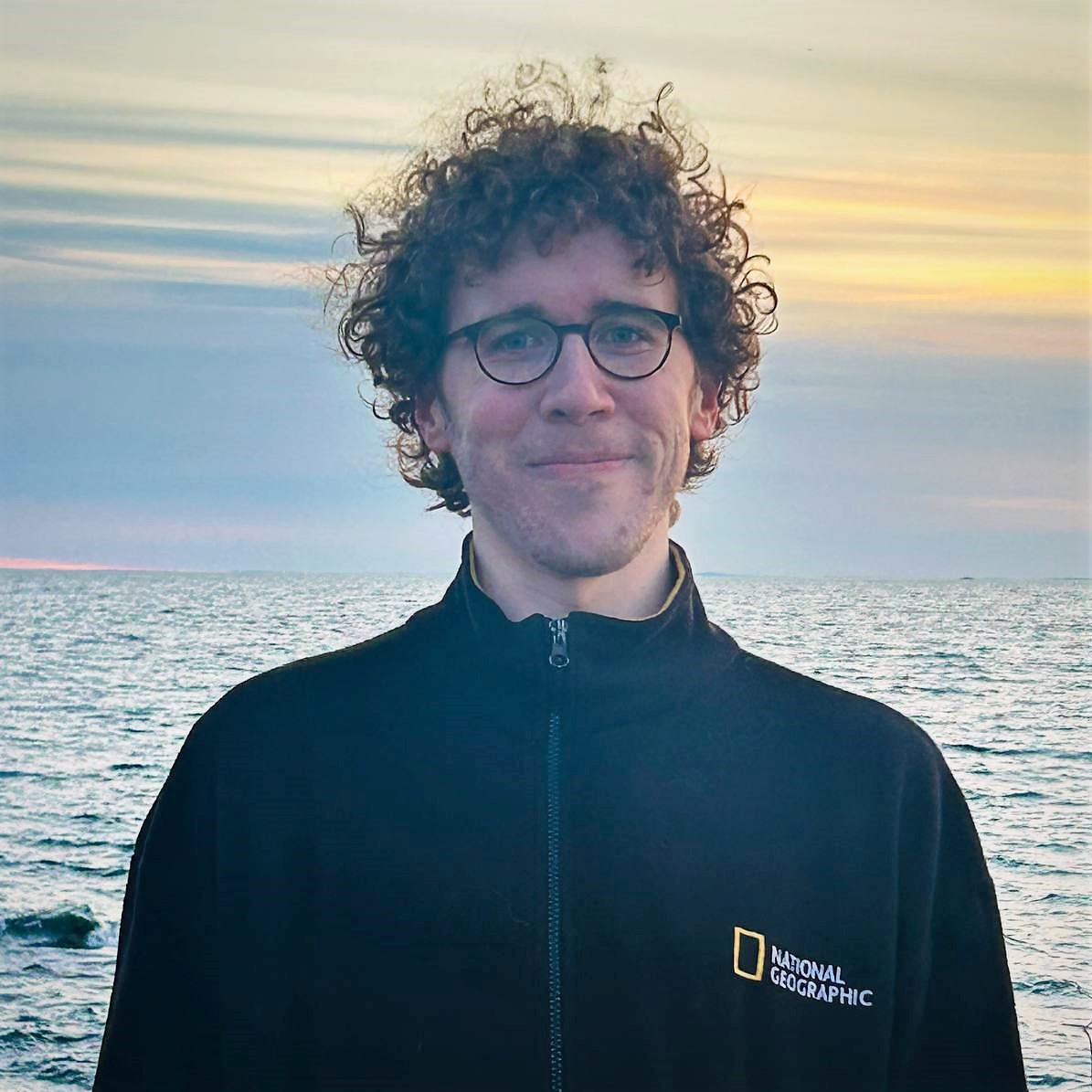 Lansing Horan IV (lansing@mit.edu) is a graduate student in the Department of Nuclear Science and Engineering at MIT. He is interested in radiatively-cooled magnetic reconnection to learn about all sorts of cool physics things. Lansing enjoys playing board/card games, TV shows of all kinds, biking, NFL football, reading, and (most importantly) watching The Matrix movies as often as possible.

We actively recruit UROP students to run research projects within the group. If you are interested in registering for a UROP project with us, visit the “Work With Us” page.

We collaborate with Prof. Loureiro’s group at MIT, who carry out theoretical work on the connections between magnetic reconnection and magneto-hydrodynamic turbulence.

We work with the High Energy Density Physics group at MIT, who design state of the art diagnostics for two of the largest lasers in the world; OMEGA and NIF, as well as for Z, the world’s largest pulsed-power machine, at Sandia National labs.

We use the 3D MHD GORGON code, developed by Prof. Chittenden at Imperial College, to design and model our experiments.

We collaborate with researchers at other pulsed-power facilities across the US and internationally, including the COBRA generator at Cornell, the MAIZE generator at Ann Arbor, Michigan, and the MAGPIE generator at Imperial College London.

Of course, we wouldn’t be here without the puffins, some of the most charismatic birds on the planet. Ungainly in flight but unbelievably elegant in the water, puffins spend the winter at sea and the summer nesting on isolated cliffs. Puffins have only one chick per year, the puffling, and they feed it on sand-eels which they scoop up from the water and collect on special barbed spikes inside their beaks. Below are some photos of puffins taken by team members: 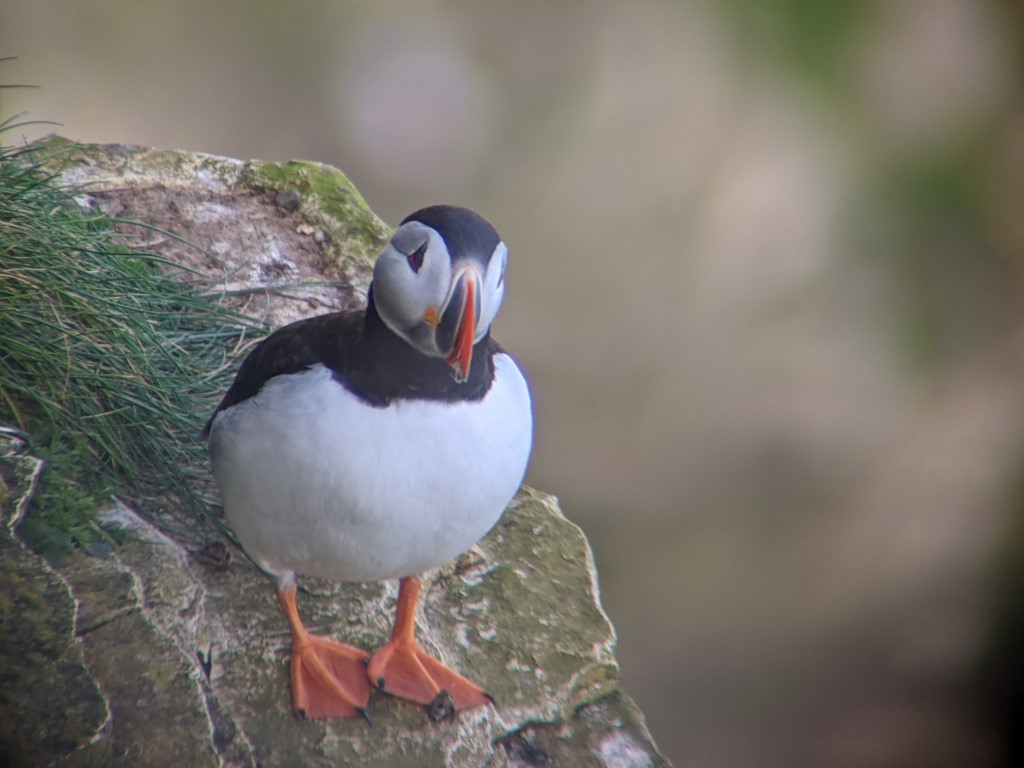 A puffin at Bempton cliffs in East Yorkshire, near where Jack grew up. Photo by Jack Hare. 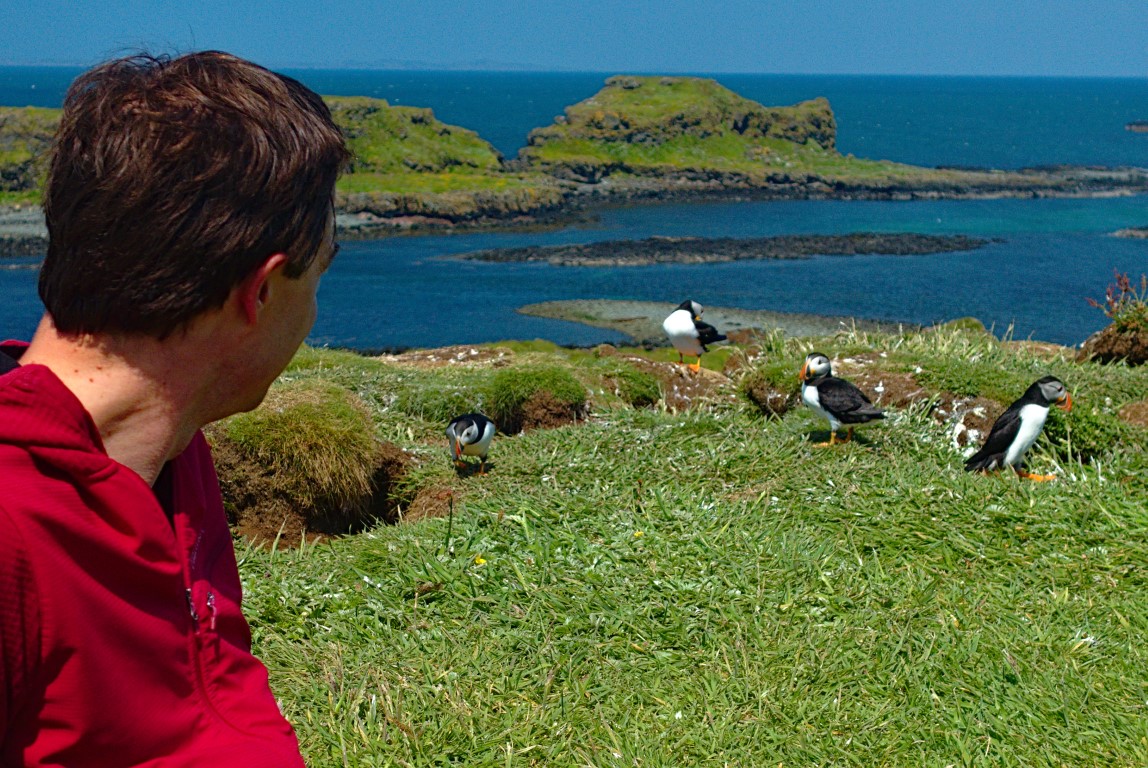 Jack with puffins on the island of Lunga in the Scottish Hebrides. The puffins here are unafraid of humans and will carry on unconcerned if you sit quietly. Photo by Alex Betts. 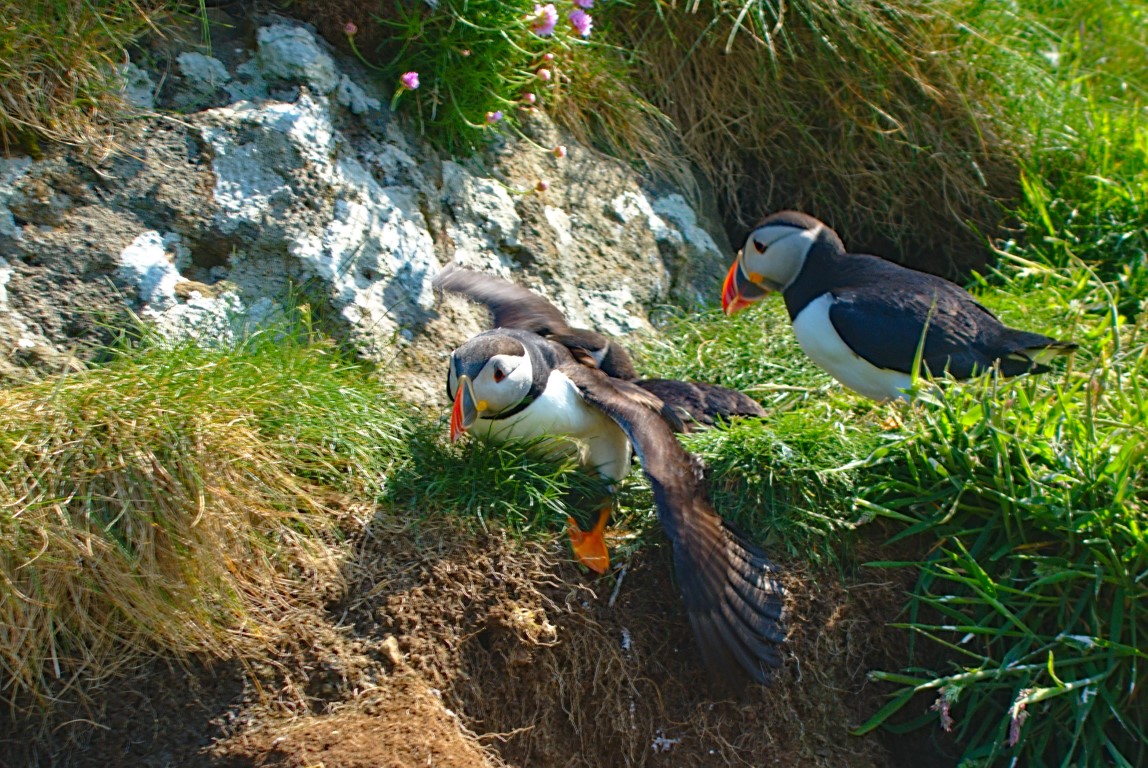 A puffin landing at Lunga. Photo by Jack Hare. 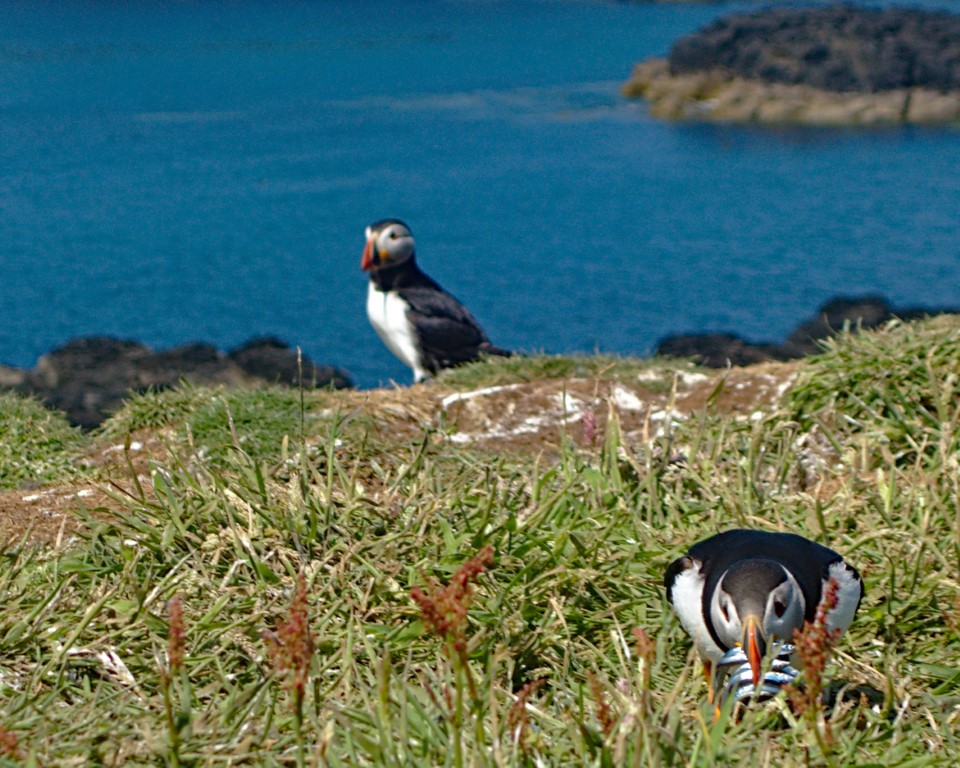 A puffin at Lunga with a beak full of sand eels for the puffling chick. Photo by Jack Hare. 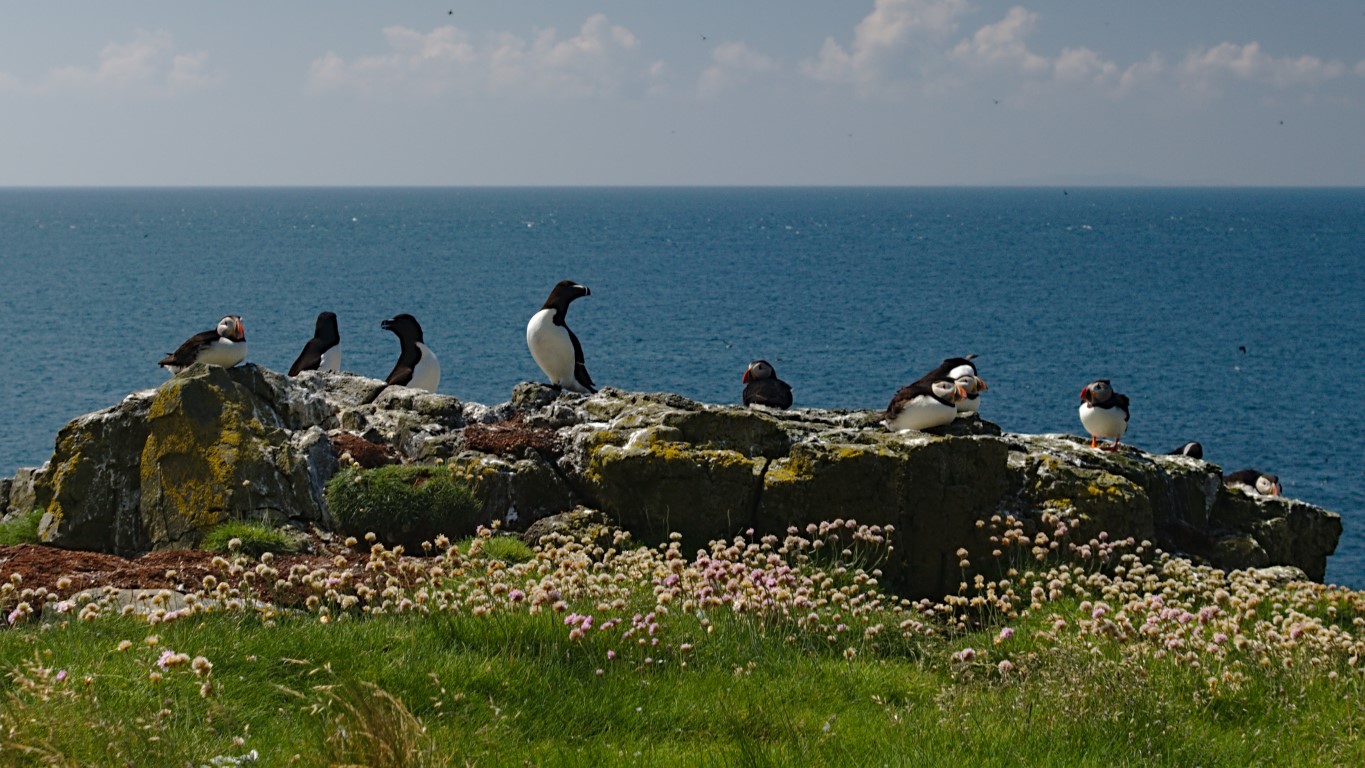 A group of puffins and razorbills sunning themselves on a rock on Lunga. Photo by Jack Hare.